The Lives of Freda:
​the political, spiritual and personal journeys
​of Freda Bedi

by Andrew Whitehead
There is vanishingly little film of Freda Bedi - but among the links below are two that take you to two remarkable clips of her. Do take a look!

Thanks to Freda's grand-daughter, Seher Bedi, here's an edited version of the launch of The Lives of Freda in Bangalore - with Ranga Bedi, Seher's father and Freda's son, as well as the biographer, Andrew Whitehead. The video includes some rare photos of Freda and her family.

​Kabir Bedi + Andrew Whitehead talking about The Lives of Freda

On the Asiaville site, the actor Kabir Bedi - Freda's son - and the author, Andrew Whitehead, talking about The Lives of Freda.

Freda in the women's militia in Kashmir in 1948
​
Freda Bedi and her family moved to Kashmir in December 1947 and spent the next five years in Srinagar. She joined the Women's Self-Defence Corps, the women's militia, a left-wing initiative in  support both of the Kashmiri nationalist leader, Sheikh Abdullah, and of the princely state's accession to India.

​Freda appears briefly at 26 seconds in:
This wonderful Pathe newsreel includes shots of both the men's and women's militia parading and being inspected by Nehru during a visit to Srinagar in 1948. This is likely to date from early May when  there was a week of celebrations of Kashmir's 'independence', which seems to mean the ending of princely rule. The commentary goes as follows:

'The people of Kashmir celebrate newly won independence. They are rejoicing at the cutting of the maharajah's oppressive powers, tempered by the realisation that Kashmir is the stumbling block to peace between India, represented here by prime minister Pandit Nehru, and Pakistan, who sent no representative. The frontier battles have been going on incessantly, and the war that has even put the women of their state under arms occupies the minds of all on this independence day.

'Addressing the crowd, Pandit Nehru speaks of the plebiscite by which Kashmir will be able to affirm its accession to the Indian Dominion, It was this provisional union that last year precipitated the frontier incidents. As in the world's trouble centres. it's the fanaticism which makes soldiers of women which defies solution by the peacemakers.

'A UNO commission is now on its way to the valley of Kashmir, the scenic beauty of which is world famous. Hopes of a settlement seem dim for in a country where even young boys are put in uniform and given arms, peace must remain remote.

'A river procession is the climax to the seven-day long celebration. The frontier war recedes as Pandit Nehru accompanied by Sheikh Abdullah, Kashmir's prime minister, says farewell to the people of India's youngest state. If the fighting spreads to this peaceful valley, Hopes of Indian unity will - '

Below there's a grab of Freda as she appears in the video - she's on the left. There's more about 1940s Kashmiri in newsreel and film here and details about this newsreel and some of those who feature in it here. 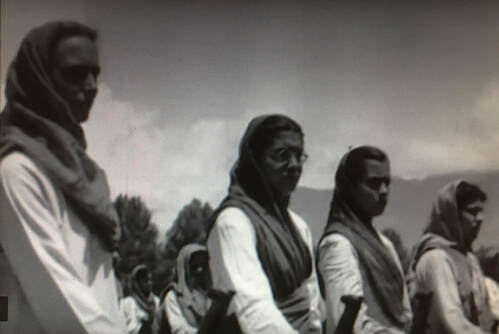 Freda with the Dalai Lama in Delhi, 1956

When the Dalai Lama made his first visit to India at the close of 1956, Freda Bedi - by now a convert to Buddhism - accompanied him to several of India's Buddhist shrines. In the video below, she appears after 14 minutes at the Dalai Lama's side during a visit to Ashoka Vihar, a Buddhist centre outside Delhi: ​
These grabs from the video show Freda with the Dalai Lama with her daughter Gulhima peeping out, and then her son Kabir who was standing behind his mother:

Here's Freda Bedi in her own voice. In the mid-1970s, while visiting her son Ranga in Calcutta, Freda - by then Sister Palmo - sat down with a cassette recorder and told the story of the first three decades or so of her life. This is a two minute extract from those tapes, describing how she first met her husband-to-be B.P.L. Bedi more than forty years earlier, when they were both students at Oxford.

It is wonderful to be able to hear her voice - it's such an insight into character. And even though this is a brief extract, with the sound quality touched up to make it more clearly audible, you do get a sense of Freda's personality.

​Who was Freda Bedi?

That's the question posed by Pervaiz Alam in a video made for his CineInk channel - and I am one of those helping him find the answer:
​

​Freda's Derby birthplace
In 2016, the BBC in the East Midlands filmed me in Derby - at Freda Bedi's birthplace on Monk Street, and at the parish church in Littleover where her father is listed on a war memorial. Here's the video:
Proudly powered by Weebly