​The Lives of Freda - EXCERPT 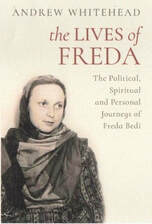 ​The Lives of Freda:
​the political, spiritual and personal journeys
​of Freda Bedi

by Andrew Whitehead
​
Here's an excerpt from The Lives of Freda - the introduction:
​
When Freda Houlston confided that she was going to marry the handsome Sikh student she'd been seeing, her best friend, Barbara Castle, replied: 'Well, thank goodness. Now at least you won't become a suburban housewife!'

Freda's mother was exactly that - a housewife in the suburbs of Derby in the English Midlands. It would have been natural, expected indeed, for her daughter to fall into that same groove. In fact, Freda refused to fit into any groove. She broke the mould - not once, but repeatedly through the decades.

'It was my destiny to go to India', Freda declared. And from the moment of her marriage to B.P.L. Bedi at a registry office in Oxford in the summer of 1933, she regarded herself as Indian and dressed in the Indian style. It would be another year or more before she set foot on Indian soil. By the time she disembarked at Mumbai, twenty-three years old and with her baby son in her arms, she had already co-edited with her husband four volumes about the country she was to make her home.

She lived for two-thirds of her life in India, adopted its national cause and customs, and took an Indian passport. She served a prison sentence in Lahore as part of Gandhi's protests against an imperial power which happened to be her motherland. Freda Bedi delighted in challenging boundaries and confounding accepted definitions of identity. She could not easily be categorised and saw no reason why she should be. 'One day she was standing in the Lahore Post Office buying stamps', said her publishers. 'An American looked at her blue eyes and Punjabi dress, and his curiosity broke the bonds of formality. Walking up to her, he asked: "Excuse me, are you English?" She smiled and said: "I am - and I am not."'

Throughout her life, Freda constantly reinvented herself. There was a restless, questing, aspect to her alongside the discipline and compassion. She was a woman of faith and spirituality - but one who was an active leftist before alighting on the religion which came to define her, Tibetan Buddhism. She must have been rare among nuns in once having drilled, rifle on her shoulder, in a people's militia. Yet the three big ruptures of her life - from a provincial town to a women's college at Oxford University, from England to India, and from welfare work to ordination as a nun - were not a repudiation of her past. Thirty years after she left Derby, girls at her old school there were collecting money for a new school Freda was setting up in the Himalayan foothills for young Tibetan lamas. Her best friends at Oxford remained in touch all her life, even once she was in holy orders.

Her life was shaped by two tragic deaths - that of her father on the First World War battlefields of northern France, and of her second child while still a baby when Freda had lived less than two years in India. There was an emotional vulnerability evident from her childhood onwards. And a steely determination too - once she had decided on a course of action, she saw it through.

Freda and Bedi's marriage was a heart-warming, insurgent romance, a defiance of convention, and an intellectual and political collaboration. The couple were, in Freda's life-affirming words, 'two students in love, refusing to recognise the barriers of race and colour, dissolving their religious differences into a belief in a common Good, united in their love of justice and freedom ... a marriage based on everything that was good in us.' But it wasn't always an easy marriage. Her husband was, in the arresting phrase of their U.S.-resident daughter, 'a chick magnet' - and the issues within Freda's marriage must have had some influence on her pursuit of a spiritual life, taking vows which required celibacy as well as meditation and renunciation. Some key decisions in her life may have been moulded by what she was escaping as well as what she was moving towards.

This is not an official biography. The initiative to write this book rested with me - I had come across mention of Freda Bedi while researching Kashmiri nationalism in the 1940s and had met a handful of people with vivid memories of her. As I found out more about her, the parallels with my own life captured my attention: from a northern grammar school to Oxford, on the left, married to an Indian, with India-born children and deeply engaged with Kashmir and its troubled politics. There are plenty of points of contrast too - in particular, I am not a Buddhist - but the manner in which Freda had moved comfortably across those frosted barriers of race and nation, and identified herself so completely with her adopted country and culture, aroused my interest. This is not simply a story of how Freda Bedi became a Buddhist nun, and what she did while wearing those maroon robes; her earlier life is not recounted here merely as a prelude to a pre-ordained vocation. This is a life story which explores the personal, the political and the immersion in India, as well as that last spiritual arc of her life.

This would be a much lesser book without the help and encouragement of the Bedi family - their willingness to talk openly about their parents, and to allow access to the remarkable archive of letters, documents and photographs that they have accumulated.  All three of Freda's surviving children - Ranga, Kabir and Gulhima - are fiercely proud and admiring of their mother. Ranga Bedi, the oldest by more than a decade, kept in touch with many of his parents' old friends. Kabir Bedi, a big figure in cinema and TV, at one time intended to make a film about his mother. So they have been purposeful in assembling a family archive - much more than a biographer has any reason to expect. A collection of letters received is always helpful - a series of letters sent a rare and invaluable bonus. Towards the close of her life, Olive Chandler, one of Freda's Oxford friends and contemporaries, gave to the Bedi family a lovingly kept file of letters, postcards, and Bedi family newsletters received over almost half-a-century - an extraordinary window on a remarkable life. In Freda's own writings, the glittering jewels amid the transitory journalism and reviews which helped to sustain her in Lahore and in Delhi also illuminate her choices and her experiences.

"You do know about the recordings?", Kabir Bedi asked as I was taking my leave after an my initial interview with him about his parents. I didn't. A year or two before she died, Sister Palmo - as she was then known - came to visit Ranga and his family, then living in Kolkata. She had bought a cassette recorder and used this to make a series of recordings reflecting particularly on the first thirty years of her life. She made extensive notes, which the family still has, and then talked directly into the microphone - haltingly at first, and then with increasing fluency and intimacy as she got into her stride. These tapes were made, no doubt, for her family - to satisfy their curiosity about her personal story. As you might expect of a nun in her sixties looking back over her life with her grandchildren in mind, her recorded memories tended to privilege the spiritual over the political, and to gloss over the episodes of personal anguish. Nevertheless, these audio tapes stretching over several hours have informed this biography more than any other source of information. For the outsider, they provide an intimacy, a closeness of contact, which would otherwise be inconceivable. They also offer an answer to questions that inevitably worry at the biographer: did Freda keep a regional accent, for instance? (She didn't).

While two of Freda's closest Oxford friends became household names in Britain - Olive Shapley as a much loved radio broadcaster and Barbara Castle (Barbara Betts when she was a student) as the best known British woman politician of her era - her achievements were not as widely celebrated.  Indeed in the country of her birth, she remains an unfamiliar name. Towards the close of her life, she gained prominence among Tibetans in exile and the Indian and western adherents of their strand of Buddhism. As a Tibetan Buddhist, she made a profound impact - encouraging exiled lamas and tulkus to reach out to new audiences in the west, and equipping them with the skills and confidence to do so successfully. This is her most enduring legacy.

It was a profoundly unconventional life - and the telling of it requires an exploration of themes which are often hidden from the historical narrative: inter-racial romance between the wars; student communism at Oxford before it became fashionable; the role of the left in the blossoming of Kashmiri nationalism; the restoring of a Tibetan spiritual tradition after the trauma of 1959 and then its introduction to a global audience.

This is the account of a remarkable and complex life - of a woman who crossed borders and challenged conventions, but who also knew how to make the most of being an exception. As a white woman who challenged Empire, promoted nationalism and embraced Buddhism, she attracted notice and attention, and on occasions deference, which she was able to turn to her advantage. Alongside her renunciation and long retreats at Rumtek monastery, she enjoyed five-star comforts and the friendship of the rich and powerful. She could live for long periods with little concern for her own welfare and comforts, but still browbeat India's prime minister into addressing her concerns.

Throughout her life, she was a woman making her way in a man's world - and she combined a certain social conservatism (she once counselled her son, when an up-and-coming actor, that a 'girl's great treasure is her virginity: a man's his pure body which can father perfect children') with a radical political outlook and an adamant refusal to be chained by the constraints imposed on women. She was feminine, strikingly so; a mother, and to the young incarnate lamas she nurtured and educated, Mummy-La; yet in the overwhelmingly masculine world of Tibetan Buddhism, she became the first for many centuries within that tradition to take full ordination as a nun - and perhaps the first ever; she struck up a personal collaboration and spiritual partnership with her guru, a high lama, which enabled this spiritual tradition to find followers and havens around the world.

Freda Bedi merits a biography not so much because of her fame, or the big jobs she held, or her political impact or institutional legacy, but because of the way she lived her life. She was no saint and never pretended to be, and at times she made difficult decisions which hurt those around her, but when she had been won over to a cause or a calling, she gave it everything she had. In a world where issues of identity - bound up in race, gender, religion and nationality - loom so large, the manner in which she crossed these boundaries speaks directly to us.